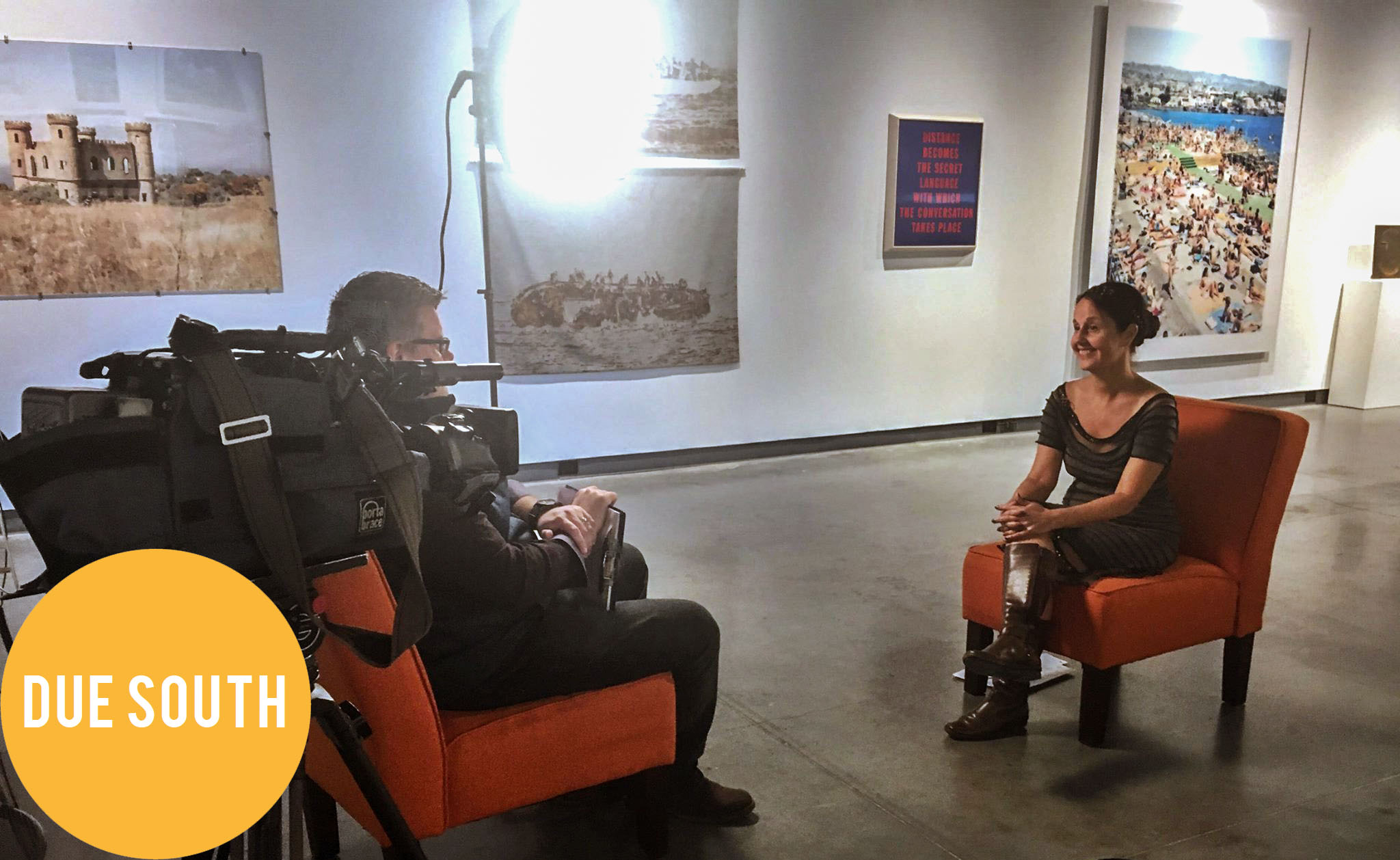 In 2014, the independent curator and filmmaker Marianne Bernstein presented “Due North” at Crane Arts’ Icebox Project Space, uniting works by 13 Icelandic artists and 13 American artists (many of them Philadelphians) who visited the Nordic island as part of a cultural exchange Bernstein organized.
From NoLibs Icebox to warmer climes – plus big, creepy photos and sticky notes with political edge
Now, Bernstein is offering another unlikely artistic dialogue with a volcanic island in “Due South,” this time between 18 international and American (mostly Philadelphian) artists and 18 Italian (mostly Sicilian) artists at Delaware Contemporary.
“Due South” is more polished and ambitious than its predecessor. It also brings together a greater variety of styles and artistic media. In addition, Bernstein was able to borrow works by several internationally known artists – the Italian photographer Massimo Vitali and London installation artist/filmmaker Isaac Julien among them – lending a touch of worldliness to this venture.
Bernstein’s Philadelphia artists came away from their respective “residencies” in Sicily with some of the show’s most poetic works.
Jane Irish’s fluidly rendered gouache paintings of the decorative interiors of Sicilian palaces and villas home in on their lavishly painted ceilings and the sense of infinity (or religiosity, or both) that a sky or scene overhead can bring to a room. I was immediately reminded of Luchino Visconti’s ravishing 1963 film The Leopard.
A mini-theater with seating invites gallerygoers to watch a film made by David Scott Kessler in the medieval Sicilian town of Tusa. Shot during Tusa’s Feast of the Assumption, an annual weeklong celebration in mid-August, Kessler’s The Peasants Shouldn’t Know How Good It Is follows random, possibly mystical, events in the town, many of which seem to be viewed from the perspective of its perspicacious stray cats.
Nearby, a video by Cindi Ettinger echoes the sense of timelessness she found in Sicily while traveling along an ancient road. Her images of a landscape shot from a moving car are shown through an hourglass shape modeled after two of her plaster sculptures also in this show.
Kelsey Halliday Johnson’s diptych of photographs of two ancient Greek sculptures found at Agrigento, a city on Sicily’s southern coast and the site of the ancient Greek city of Akragas (she photographed them through the glass of their original, decades-old fluorescent boxes that were left to molder in an older wing of the Museo Archeologico Regionale di Agrigento), are evidence of the toll time can take even within a museum.
An installation of cast sculptures by John Broderick Heron, made with plaster, sand, pigment, and volcanic ash from Mount Etna look like candy-colored geological samples and are appropriately displayed on a bookshelf with a field monitor showing a video of the volcanic region near Mount Etna made by Alex Tyson, Heron’s traveling companion and fellow researcher in Sicily.
Andrea Modica, a Sicilian American photographer based in Philadelphia, is represented by two photographs of Sicilians, one showing a well-dressed man on a balcony dramatically throwing back his head, another of a young girl with a serious expression. Both capture an unusual, or perhaps typically Sicilian, self-possession.
Some other standouts include London-based Sicilian Glauco Canalis’ color portrait of his Sicilian girlfriend, Alessia, and their parakeet, and Sicilian Massimo Cristaldi’s photograph of an abandoned Sicilian McMansion.
Through April 30 at Delaware Contemporary, 200 S. Madison St., Wilmington, noon to 5 p.m. Tuesdays and Sundays, noon to 7 p.m. Wednesdays, 10 a.m. to 5 p.m. Thursdays, Fridays, and Saturdays. 302-656-6466 or www.decontemporary.org. 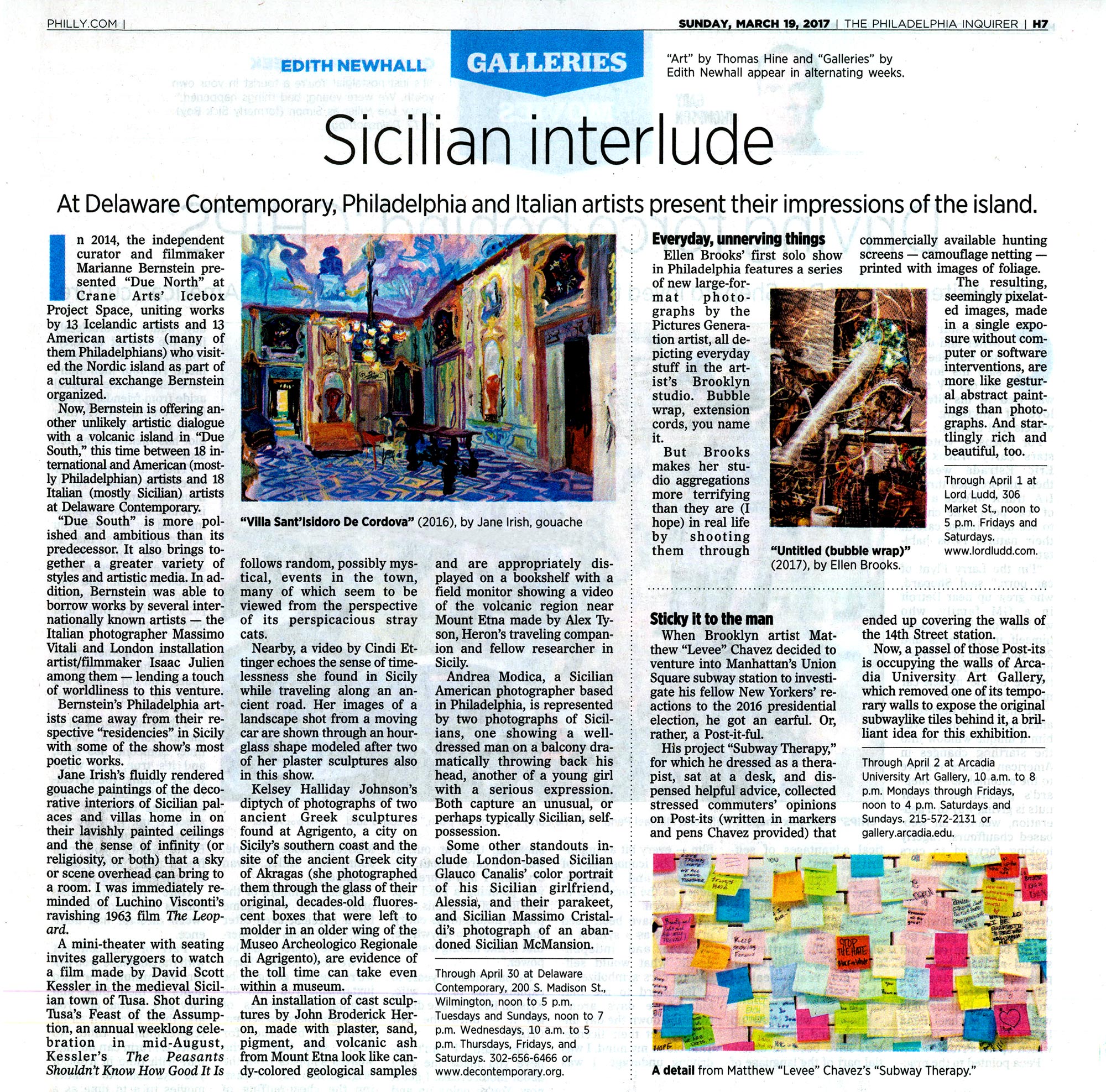