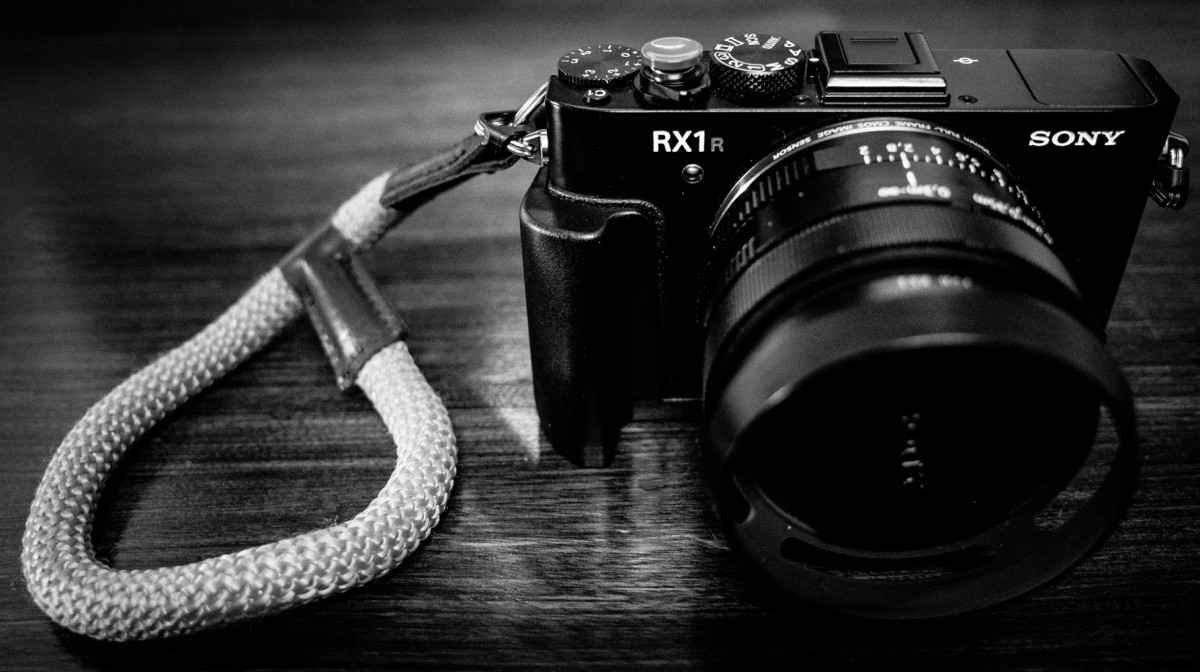 The Sony RX1R II represents the “normal” evolution for a photographer with an addiction for small cameras with great image quality. Over the course of the “digital” years, starting from 2008, I’ve followed my path towards the “small cameras” world. From the “venerable” Panasonic LX3, passing in 2011 to the Fuji X100 and , in 2013 to the X100s, coming to the Ricoh GR, and now the RX1R mark II.

Before listing the great things about this camera let me state, straight away, things I don’t like and the ways I found to solve some of the encountered “issues”. That’s all for the (relatively) bad news.
And now the good stuff. The lens is amazing. Sharp and natural in the transition between front and back layers. The sensors is so “organic” that the resulting images do not look digital. The high ISO are fabulous and noise somehow pleasant. You shoot at ISO 12800 and the looks is similar to a scan of my beloved 6×6 Provia 160C… If you pair this with the 3D look that this lens is able to produce, I should say that this the first camera giving me something similar to the look I’ve always lusted after on my Rollei+80Planar, including the Pentax 645Z: tested the latter with the 55mm and could not replicate the same tridimensionality I’m finally having with the RX1R II.

The 36Mpixel sensor of the Sony A7R is a good one but does not posses the same “analogic” look. It’s more cynical. Especially when you pair if with the really sharp Sony 55mm 1.8. I know, the RX1R II and the A7R II share the same sensor of the A7R II and all wonders have been already said on it so I would not entertain you further on it.

Autofocus is finally OK. It hits and it’s reasonably fast, much better then the A7R (of course, I would say). 399 Hybrid detection points according to the specs. I don’t care much, I generally use the flexible spot M or S in the center. For sure it works much better then everything I had so far, especially in dim lights.

Viewfinder is very good. I use it “naked”, without the additional circular element. The fact is that, it’s really true, there is a special power on those cameras with fixed lenses. Everything is perfectly optimised for the lens-sensor pair. My Ricoh GR, my Sigma DP3 Merrill, this small Sony: they’re all great in terms of resulting image quality with obvious differences in final resolution, look, usability etc. The Sigma is super-sharp and totally “Foveon”. Unusable above ISO400. The Ricoh is a good sensor paired with a very good lens. But APS-C and not a great deal of “3D” effect. But fantastic usability, good battery life, very small size.

The RX1RII is, finally, what I’ve looked for in the last years. A great imaging machine, full of resolution for my big prints, with an excellent output quality.

Is Leica Q a competitor? Not really. Beside the 28mm vs the circa 33mm of the Sony the quality of the resulting file is really different. I mean, the lens on the Q is OK, but the sensor is far, far behind. I had the Q on loan for a week and found the resulting files not acceptable in pure IQ. If you just try to push a bit the shadows noise come, sometimes with banding. The Q, in terms of pure IQ, is more comparable to the Ricoh Gr, not to the Sony.

Sure: the Leica man-machine interface is better, and usability also. But for me Image Quality is the very first parameter of a camera judgement and I could not accept a more expensive camera with a sensor still in the class of something I had in 2012.

Now, if you came that far and are not yet tired about reading, you are probably curious to see  some images out of this camera. I do not shoot targets or walls so I will use some of the images taken during the Easter processing in Trapani, I Misteri. The annual ‘Procession of the Mysteries’ in Trapani, Sicily, is a 400-year-old ritual brought to Sicily by its Spanish colonizers of the 15th century. The procession begins at 3:00 pm on Good Friday and continues for 24 hours. In the procession, townsmen carry one-ton statues depicting the Stations of the Cross. The last statue is that of the Madonna, who ‘searches’ for her lost son, Christ, until she ‘returns’ to the town church on Holy Saturday. One of the most interesting characteristic of this procession is the “annacata”: statue holders walks making the statues moving left-to-right, following the, slow, funeral, rhythm played by the accompanying band, making the atmosphere almost surreal.

By clicking on the images you should be able to see the whole gallery. In it all but three images are taken with the RX1R II. The other three are taken by A7R+Sony 55mm f1.8. Among the ones shot with the A7R this is not Manhattan :-), it’s Trapani: 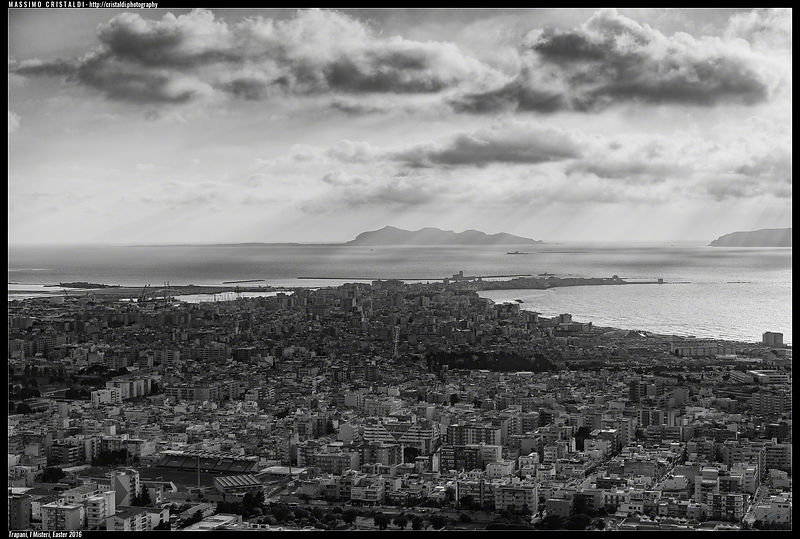 This is the third collection of photographs that I dedicate to this incredible procession. The first photographs, ten years ago, a second time in 2008. The first two collections are in Black and White, this time in colours. 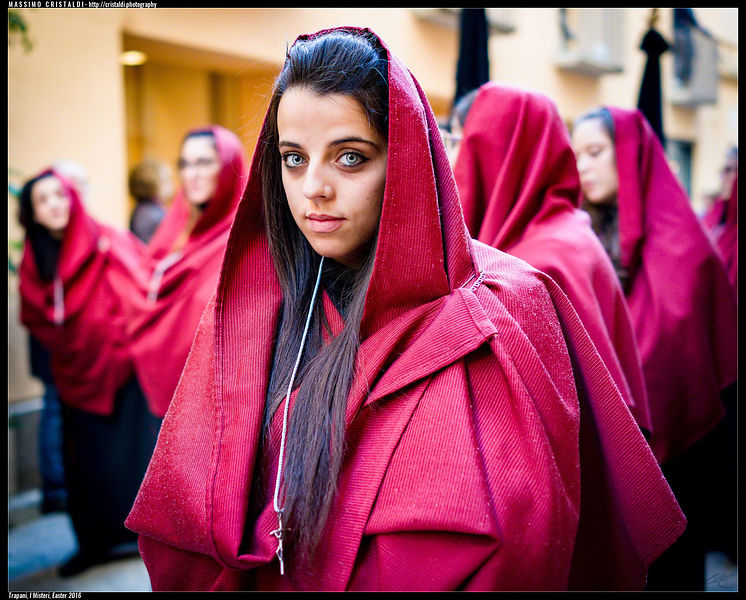 Funny enough I was able to recognise some of the subject of the first photographs this year: it was great to find them in great shape, especially the not anymore younger ones. 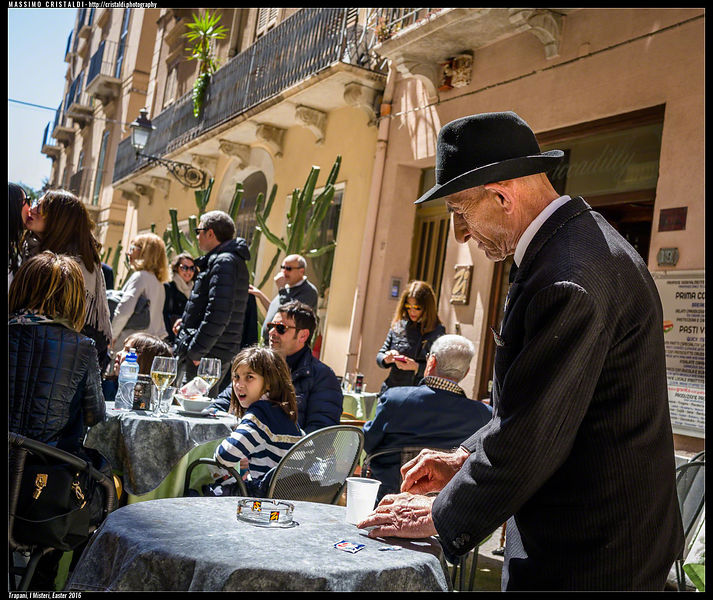 That’s all for now. Feel free to make questions using the comments on The Visual Experience.