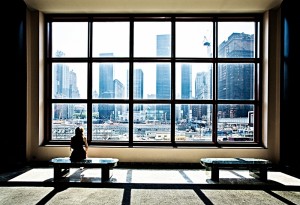 Ground Zero has been selected for “Dependtendency“, an unique exhibition of 10 works to be held in the park of the island of Certosa, Venice, 4 to 7 June 2009, during the 53rd Venice Biennal of Visual Arts. Inauguration and presentation of the exhibition catalogue, Saturday 6 June at 20.00 hours pm.

‘Dependtendency’ theme
Buddist thought is based on there being a relationship of mutual dependence between persons and objects: reality is the convergence of all its parts in a single unit. According to this philosophy, a dualist vision which separates earth from sky, subject from object, or man and nature, does not exist. Implicit in the attitude which derives from mutual dependence is respect for persons and nature. Instead, western thought has developed the idea of objectifying the world attempting to dominate it through the use of technology.
This thought process has inevitably led to a degree of nihilism evident in the world today, in which there is an uncontrolled development of technology and a critical conscience which attempts to fit thoughts according to the challenges present at any particular moment in time. The aimless state of nihilism which exists today, characterised by an environmental emergency, a waste of the planet’s resources, the ever-growing imbalance between people and nations, has accelerated this thought process. As time passes we realise the growing difficulties our planet is experiencing and that everything within it is dependent on everything else. A vision of reality which takes into account the inter-relationship of everything, similar to that expressed in oriental philosophies expressed in a non-dualistic manner, appears to be in the ascendancy: a holistic vision for our system which takes into account all its complexities.
We would like to bring these themes to the attention of artists worldwide and ask those sufficiently stimulated to prepare a work for a special exhibition to be held in Venice during the 53rd Visual Arts Biennal. Each artist, according to his or her cultural origins and the chosen mode of expression, will bring a particular interpretation, perspective and sensibility to the theme, in order to create an exhibition which enables a common forum of communication.
The theme to ‘Dependtendency’ was born out of a conversation between Steven Music and Giancarlo Vianello, and presented to the City of Venice as a current, interntional issue around which visual artists could elaborate specific works according to their cultural roots – February 2009.