My work SIMULACRA has been selected for this year edition of the Festival Photomed.
The festival will be in Sanary-sur-mer, Bandol, Island of Bendor and in Toulon from May 24th to June 17th. I’ll be attending the opening of the festival. 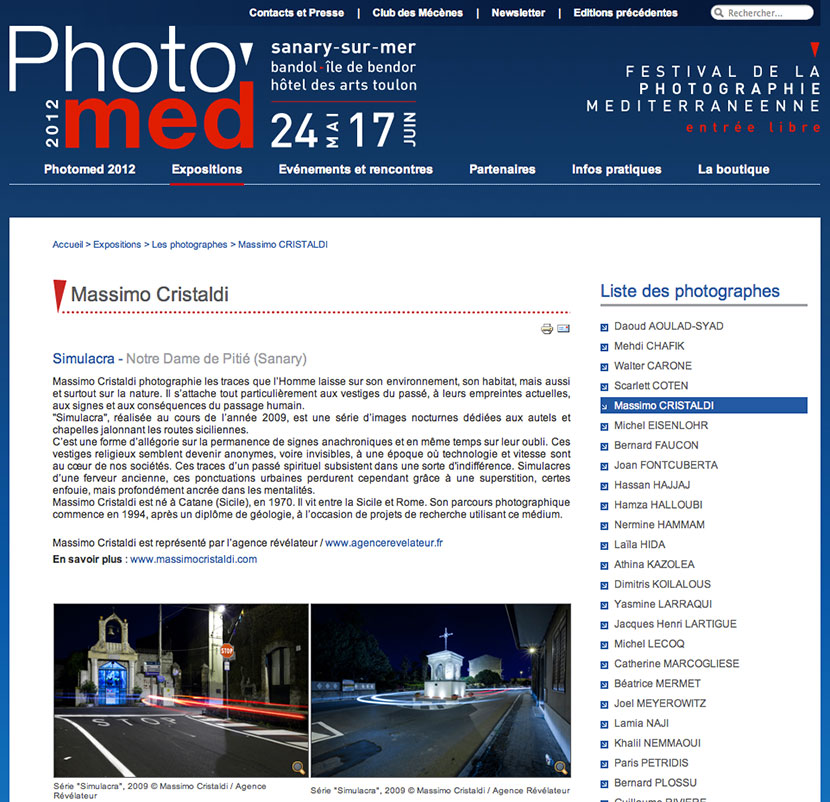 Editorial:
THE IMAGINATION OF TRAVEL
Jean-Luc Monterosso
Artistic Director
As a festival dedicated to discoveries and rediscoveries, PhotoMed, now in its second year, welcomes Morroco as the featured country, and the Italian, Massimo Vitali, as its guest of honor. Relatively little known to the general public, Morrocan photography today is led by artists, often divided between two countries, who question their identity. The selection of photography by Mouna Mekouar offers “a journey juxtaposing the near and the far, the private and the public, the intimate and the unknown.” Well-known photographers, such as Daoud Aoulad-Syad, are exhibited alongside young artists who have never been shown in France, such as Mehdi Chafik, Yasmine Laraqui and Amza Halloubi. These artists illustrate a vitality and creativity in their photography that carries strong local resonance while also engaging the main themes and concerns of
today. As counterpoints, Scarlett Coten’s take on contemporary Morroco, as well as that of Gérard Rondeau in the footprints
of Delacroix in Morocco– both emphasize a personal approach that allow us to discover, beyond the clichés, the remnants of the past in a changing society. Bernard Faucon’s adventure “Le Plus beau jour de ma jeunesse” (“The Most Beautilful Day of my Youth”), started in Morocco and led him to 25 cities around the world. In a new edition of his work, Bernard Faucon invites us to take part in the adolescent dreams of young people, who experienced and photographed an exceptional day, either in Essaouira, Damascus, or Istanbul. As always in the Mediterranean region, dreams often mingle with ancestral myths.
Massimo Cristaldi draws out traces of the past found in small chapels scattered along the roads of Sicily. The world of Martine Voyeux is “populated by legends, myths and dreamlike characters”: Seville, Grenada, Tangiers, Bethlehem and Naples are places where diverse cultures mix. In the work by Nermine Hamman, a significant figure in the Egyptian art scene, iconic images happily mingle characters like Bonaparte, Frida Kahlo, Johnny Weissmuller, Marlene Dietrich… Far from being simple snapshots, these modern icons invite us to reflect on ideologies embodied by the images and refer to a social and political reality, seen in the figures of young soldiers from the “Arab Spring” in Egypt who stand detached from the kind of idylilic backdrops so commonly seen in old postcards. But if travel carries along with it the sense of the imaginary and achetypes of a society, it also highlights the figures of reality. Three Greek photographers sent to Middle East by the
Photography Museum of Thessaloniki (Athina Kazolea, Dimitris Koilalous and Paris Petridis) use urban architecture to show the weight of history and its trail of hopes and sufferings. In Lebanon, Palestine, Israel and Egypt, each of these photographers pursued the signs of the past in a present torn by incessant conflicts. On to this image of the Mediteranean, a region of contrasts and tensions, is superimposed the charms of travel in the East or an enchanting past, both imprinted on the collective unconscious. It is the Riviera of celebrities, as photographed by Walter Carone, or of the Côte d’Azur in the first half of the 20th century, as seen in the work of Jacques Henri Lartigue – a place for fancy cars, waterskiing competitions, and well-known literary, artistic, and political figures, like Sacha Guitry, Picasso, John F. Kennedy…
This exhibition, presented by the Jacques Henri Lartigue Foundation and readapted especially for Photomed in Sanary, will
undoubtedly touch the heart of a vast audience. On top of that, the extraordinary discovery of Jean Fontana will stir the passions of and inspire the visitor in equal measure. Joan Fontcuberta will reveal, supported by irrefutable documents, the fossil of a mermaid discovered during underwater excavations in Sanary-sur-Mer.
What would the Mediterranean region be in black and white, without its colors? Massimo Vitali, guest of honor at the festival, also knows the importance of color. A refined colorist, he paints a region that is unfortunately too often covered by gray concrete. His last works were recently exhibited in London. Both strange and appealing, these images resume his favorite themes: the coast, the beach and its activities. At the Hotel des Arts in Toulon, the retrospective of Joel Meyerowitz is an ode to color. The exhibition offers an anthology of unknown images from Provence and traces
the itinerary of this great precursor. In his book, “Cape Light”, published in 1979, he lays out the history of photography. Based in Sanary, the Photomed festival also has locations in Bendor, Bandol and Toulon. This year’s festival plays host to photographers from the neighboring county of Var (Catherine Marcogliese, Béatrice Mermet, Alain Sauvan, Michel Eisenlohr, Michel Lecocq), as well as to artists who have passed through the region, such as Guillaume Rivière (who lives in Toulouse) or Bernard Plossu, whose latest offering is a memory album from his encounter with the architect Rudy Ricciotti.
Slideshows, workshops and portfolio reviews complete this panorama of discoveries included in the line-up for this second edition of the festival. Covering the realms of myth, dream and reality, Mediterranean photography is more than ever like the novel “a fabulous mirror carried along a great route.”