In 2013 alone, over 40,000 migrants braved the Mediterranean Sea in an attempt to reach Italy (and Europe). Many of these migrants ended up in Sicily and the surrounding islands. The route was a familiar one, as thousands of these people have previously traveled this route in years past during previous attempts. In “Touch Ground,” I photographed beaches, harbors, cliffs—the places where, in recent years, migrants have first reached the shores of Europe from their original homes in North Africa. The photographs form an exploration of the idea of “Terra Firma”, a coveted place, object of hopes, tragedies, happiness, disillusion, and sometimes, death. I chose to make my pictures at night, because it was at these times that the places appeared full of meaning. Within the absence of the darkness and the emptiness, I sensed an epic quality to the scale of these migrations and the individual emotions that each journey embodied. These photos are, then, a work on the borders: the borders between land, sea and men. The seascapes depicted are epic and empty yet also “places of the present,” places of contemporary history. They are, at once, the theaters of tragic, life-altering events and at the same time, simply the sea for the rest of us.

To my son Vittorio, wishing him to live in a World without borders.

In 2009, in Lampedusa, during the “anti-immigration regime” promoted by the Berlusconi government, the situation was apparently “calm”.  You could see the signs of immigrants arrivals: abandoned barges all around the island. At that time I took the photographs of Wrecked Dreams Lampedusa. Living in Sicily, I could not but be impressed by the size of the migration phenomenon and I got in touch with some immigrants who arrived in 2002, and who are now living among us. I wondered how the ‘ground’ is for those who see it after weeks at sea, those more fortunate than the others. Anthony told me, in an uncertain Italian, “Sea, sea, sea, fear, fear, fear.” Then, finally, a light, a landing. Then, finally, a light, a landing, a beach: Terra. A possible salvation but only for those who are really lucky. And so I decided to start a systematic study of the places of “landings” , from Lampedusa, Linosa, to the south and east coasts of Sicily. I found the beaches, cliffs and , once again, the barges, sometimes still beached, sometimes towed into harbors. It is interesting as what for us is “the sea” can take on a completely different meaning for those who come from the sea . In Italian “sbarco”, landing, has a vaguely militaristic meaning which has become part of the current lexicon: the landing in Normandy , however, is very different from the landings in Sicily, unless you’re amongst these who feel “invaded”. In these years of night photographs I tried to slowly tune with the places and let me be influenced by them. Touch Ground is the result, however imperfect, of the emotions felt on those beaches and in those places, with an increasing number of events, often tragic, that is continuously growing. “As of 19 March 2014, since 1988, at least 19,524 young people have died trying to storm the fortress Europe , of which only 2,352 in 2011 , at least 590 in 2012 and 801 in 2013. ” (source: FORTRESS EUROPE) .

Thanks to Gabriel Del Grande with its FORTRESS EUROPE, source of valuable information; Leo Borelli, Salvo Lupo and Salvo Messina for being often with me at night, Joel Meyerowitz , Pippo Pappalardo and Doug Menuez for their precious advice. 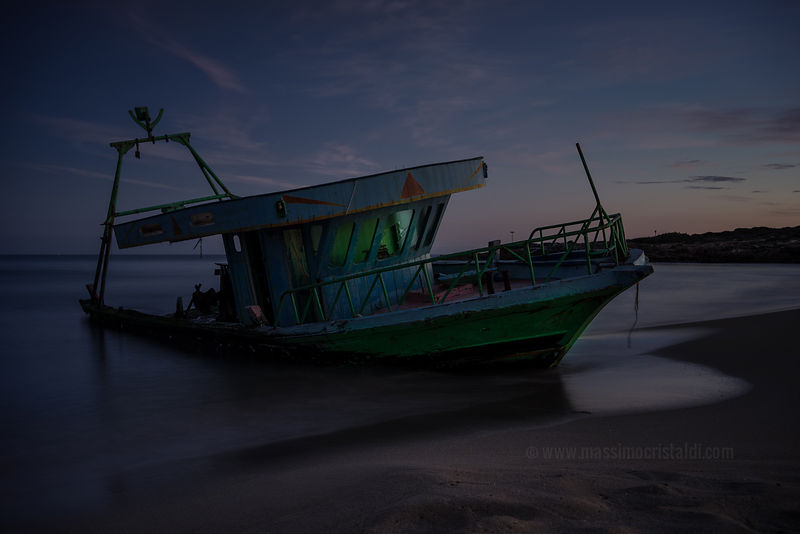