Electromagnetic pollution is subtle: nobody actually sees or perceives it but there is early evidence there may be a link between EMF exposures and autism, affecting our DNA and jeopardizing the health of future generations. In Niscemi (Sicily) within a natural reserve the Naval Radio Transmitter Facility (NRTF-8) station of the U.S. Navy, currently hosts 41 transmitting devices. The same location is where one of the four world ground stations of the MUOS system is taking place. Inhabitants are concerned about the risk linked to this new electromagnetic source. My photography work on Niscemi MUOS started in 2010, when the construction works were still at a very preliminary stage. At that time there was already good deal of awareness in the population. Over the last years, with the project going on, people attention to this issue grew up. Niscemi is already exposed to serious pollution agents, being 10 km far from the Gela refinery, one of the biggest industrial settlements in southern Italy. There are today serious concerns to the effects that the new system would add to the existing, already high, electromagnetic emissions. These concerns are linked to health’s statistics showing an above the average number of casualties linked to cancer. The biggest problem is that at present days there is no impartial and serious measurement campaign on the existing electromagnetic field, nor a scientific projection of potential effects of the new installation. The area where the Naval Radio Transmitter Facility is built is particularly beautiful, and its felt by the Niscemi inhabitants as “their” wood. 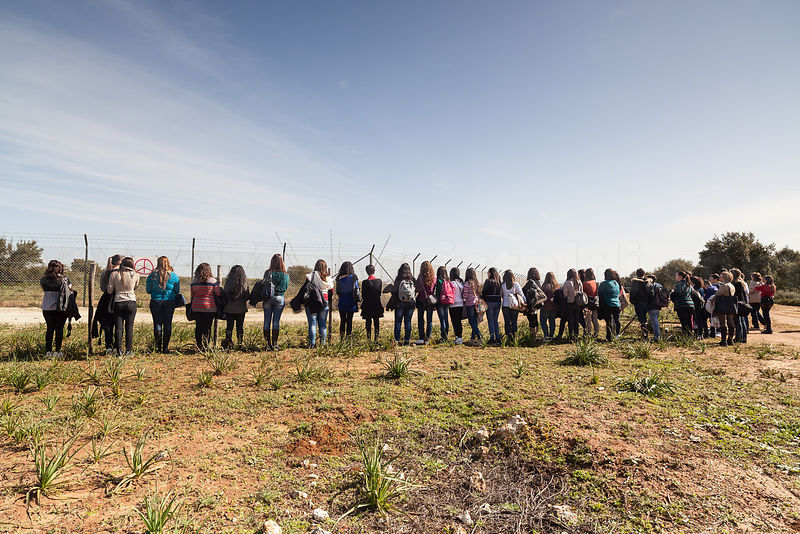 In February 2013 I had the possibility to photograph families and students in the Niscemi Sughereta, hearing their voices, listening their concerns, feeling the worries for their children and for their health. Youngsters and families close to barriers, staring to surreal antennas,  small “Davids” versus a gigantic “Goliath”. My viewpoint is pretty clear, no matter if you’re in favour or against the construction of the MUOS: I tried to represent the facts and the emotions of most of Niscemi inhabitants.

A great thank you to Mario, Palma and Enzo for supporting me so much with this project. 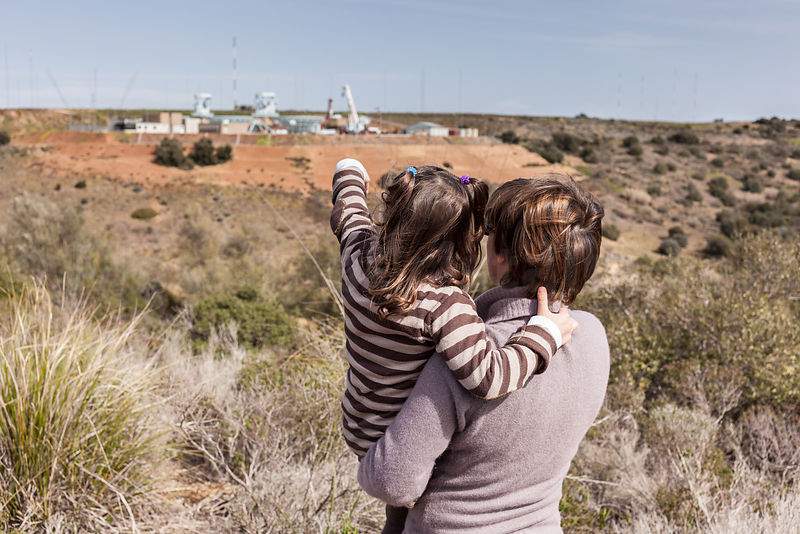 Year: 2010-2013 | Please contact us if you wish to publish or use these images. Model Releases available.

In Niscemi, Sicily (province of Caltanissetta, 26.000 inhabitants), within the nature reserve “Sughereta di Niscemi”, a site of European Community interest (SIC ITA 05007), the Naval Radio Transmitter Facility (NRTF-8) station of the U.S. Navy, in accordance with the bilateral agreement between Italy and the U.S.A., hosts 41 transmitting devices, which are located in the above-mentioned area. The objective of its presence is to provide a telecommunications support system for the activities of NATO in Europe and the Mediterranean region.The Niscemi Nature Reserve (c.a. 3000 hectares) is a habitat of significant naturalistic and scientific importance. The existing flora, located within the area of this military operation, holds about 250 species, 40% of which are exclusive to the Mediterranean area. Some of these are under European preservation (orchideae, liliaceae, iridaceae and cistaceae). The area is also of great interest for the presence of a large number of bird species (122, 8 of which are protected by international conventions because they are classified as endangered species) and of 16 species of mammals, 5 of which are also at risk. Inside the station NFTR-8 Niscemi, situated 3 Km from the town center, the project based on MUOS technology (Mobile User Objective System), foresees the installation of three parabolic transmitters which will operate at microwave frequencies and two helical UHF transmitters. The U.S.A. Defense Department’s Mobile User Objective System is a new-generation military satellite communications system designed to support the U.S.A. and the NATO military operations all over the world. The MUOS constellation will consist of four operational satellites and a spare one in orbit. Moreover, the system includes four ground stations located in strategic sites, in Hawaii, Virginia, Australia and Italy (Niscemi). The latters is in construction, in order to ensure users bettered worldwide communications capabilities. On June 1, 2011, the Italian Government and the Sicilian Government authorized the starts of the works for the ground station MUOS in Niscemi, without involving in the decision the National Parliament and the Sicilian Regional Assembly. The construction work began immediately thereafter. The Italian authorizations were issued solely on the basis of the documents provided by the U.S. Navy and on the reassurance given by the same U.S. military authorities, stating the lack of risks for people’s health and environment. Two studies, based on the risks associated with exposure to the electromagnetic fields, conducted by  experts appointed by the Mayor of Niscemi in October 2009 and in November 2011, including Prof. Zucchetti (a Professor of “ Protection from Radiation” at the Polytechnic of Turin and research affiliate of MIT), claim that the evaluation of environmental impact, written by the U.S. Navy, is “incomplete and highly unreliable” and furthermore that the attached documentation is “conflicting, insufficient and inadequate”. According to these two reports, the studies based on the risks associated with the exposure to electromagnetic waves should have primarily dealt with the potential results of an accident, as in the case of an error of pointing which would involve immediate damage to the population subject to microwave fields of short duration but of high intensity. Also effects as a result of long-term exposure to electromagnetic waves of low intensity should be taken into account, which numerous international scientific findings believe are possible cancerous agents for man. A final aspect to consider deals with the risks of interferences with the flight traffic of the airports of Comiso, Sigonella and Catania, presently located within 70 Km radius from the NFTR-8 base. The recent measurements taken by the Sicilian Agency for Environmental Protection (ARPA), in proximity to the NFTR-8 base, show that, as present today, the emissions of the existing antennas are, in some cases, over the limits established by Italian legislation. Therefore the MUOS emissions would be added to the existing ones, with serious human health risks as well as risks to the ecosystem of the reserve. The awareness of the harmfulness of electromagnetic waves and an observed increase of cancer cases, have prompted the population of Niscemi and of the surrounding communities to vigorously oppose the imposition of MUOS and to ask for the implementation of the “Precautionary Principle”, recognized by the World Health Organization and part of the EU Lisbon Treaty. Since March 2009 there have been many manifestations which have also involved local schools, institutions, political parties and environmental associations. Numerous citizen committees have been formed in Sicily, and now on a national level, to request the suspension of further construction of MUOS, as well as the dismantlement  of the existing antennas and the restitution of the reserve to the citizens. Since November 2012, in the vicinity of the NRTF-8 base, there have been three permanent civil garrisons, with the explicit objective of slowing down the completion of this construction. Subsequent to the popular protests, in September 2012, the Italian Parliament has begun to address this issue. Two parliamentary committees have already asked for the suspension of the work in progress. The Sicilian Parliament, following the hearing of scientists and environmental associations, requested the President of the Region to provide for suspension of all the permits previously issued. On February 11, 2013, the Sicilian Regional Government has initiated a revocation procedure of the permissions previously issued by the Department of the Environment. This decision is based upon the fact that Sicilian Government said that, even today, there are insufficient studies, which may assure the safety of the ground station’s electromagnetic waves and the effects they could have on the nearby residents. Consequently, the U.S. Navy should suspend the construction of the MUOS inside the Nature Reserve of Niscemi, but it does not seem willing to abandon this construction project.