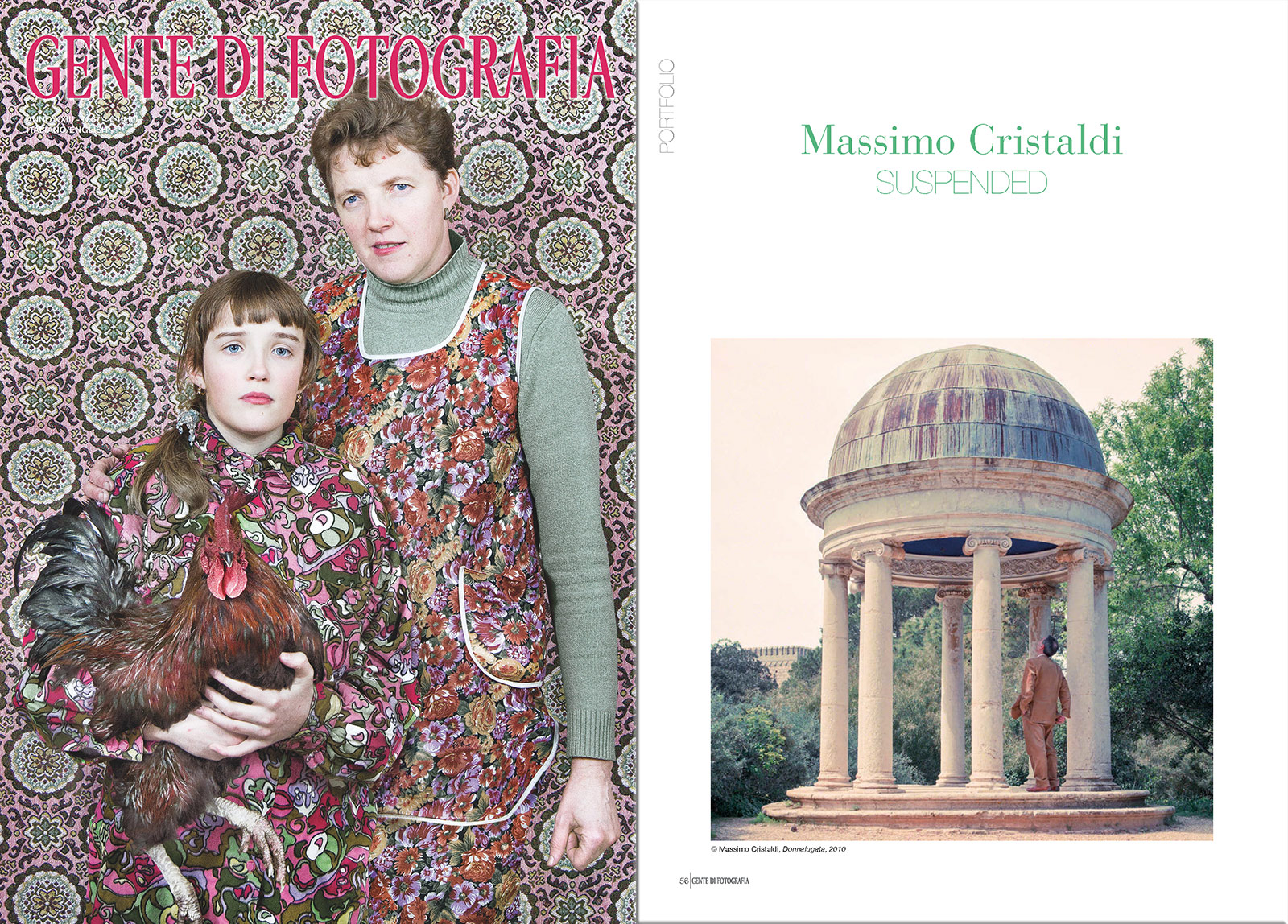 This work is about an unusual and sometimes surreal journey in Sicily.

“The world is big and beautiful, but it is quite offended”, Elio Vittorini made his character Ezechiel say in Conversazioni in Sicilia ( 1941)1.  Just like in Vittorini’s novel, in Cristaldi’s work the journey proves to be a pretext for a return to origins, a search for the essence of places, for traces of a personal and collective history, for the intimacy with the genius loci2, for the profound relationship between a people and its homeland.

However, Cristaldi decides to focus on the discordant aspects of that landscape, on architectures whose proportions are very different from the harmonies of the Greek-Roman temples or the Arab-Norman and Spanish buildings, the majestic ruins of a complex history. Cristaldi talks about a Sicily ‘suspended’ between past and present, and his images, just like the ‘ruins’ he has immortalised, become a powerful metaphor for something else.

Photographs and ruins share, indeed, the same value of a physical and symbolic space of representation of the present as well as memory of the past. They are both autonomous subjects endowed with great evocative potential, a locus of research, an ‘admonition’, a critical instrument and reflection on the dysfunctional relationship between man and his environment.

Cristaldi’s images show a disharmonious geology of the landscape, a fragmented and disintegrated morphology of his territory, disfigured by abandoned and suspended constructions, awkward ruins, spaces waiting for new identities and reconquered intimacies.

Devoid of any nostalgic artistic glorification of the past, the “ruins” and the suspended architectures of Cristaldi’s photographs show a precarious and uncompleted contemporary landscape. One that changes continually, destroying and re-building spaces, depriving them of their original identity, turning them into “non-places”(3): the greyness of cement meets the blue of the sky, the remains of a small Greek temple serve as a background to the presence of a man, delirious modem buildings disfigure the beauty of their surrounding natural landscape, ancient buildings reactivate the memory of times past.

The evocative power of these images invites us to reactivate the original meaning of these places, to re-discover their identity, to reflect on how the built space integrates with its environment. We are in a world of majestic and undisputed silent protagonists (the sky, the sea, Mount Etna), even if violated and spoiled, obstinately resisting the devastating actions of men and time.

Every image serves as a kind of warning concerning the need to gain a deeper understanding of our territory, it warns us against the risk of transforming places we inhabit into ghostly spaces, non-places, areas without any inner meaning, identical to many others, extraneous to ourselves.

Cristaldi’s images want to give voice to those places and, despite the presence of globalisation, uniformity and unrecognizableness, they urge the observer to unveil hidden meanings full of expressive and emotional potential. They intend to restore lost perspectives of wonder and seduction, turning them into new landscapes of hope and regained closeness.

A PDF of the article is available for download