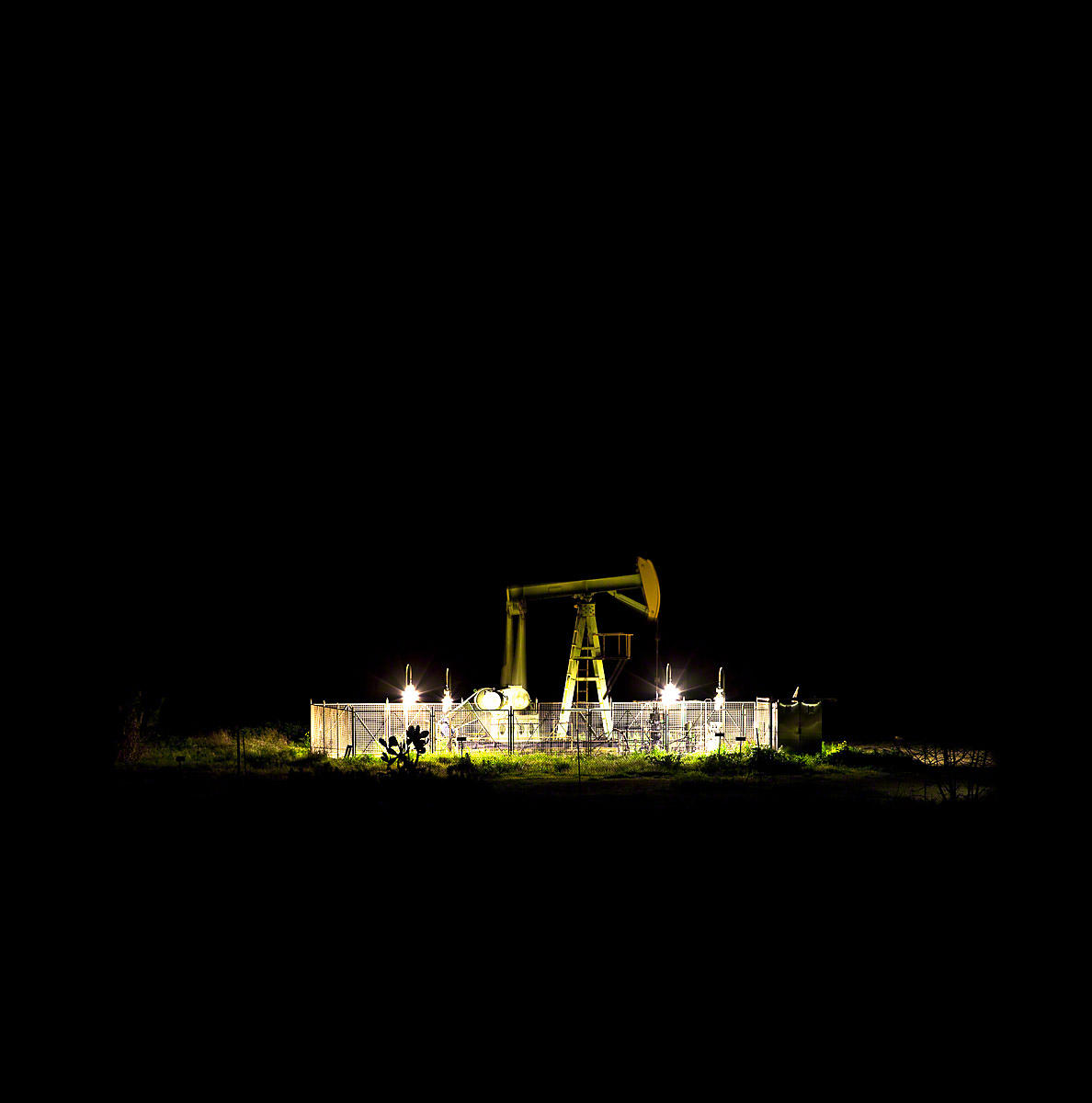 The series of photographs capture what appear to be ‘islands of light’ at night. There is a sense of confined gloom fighting with darkness that all around turns into oblivion and mystery. This shroud of brightness envelopes all things that are built as a defense, both the physical and the light barrier. The islands of light represent US navy housing complexes and structures located nearby, in a dark and silent countryside. They are confined and isolated ‘towns’ that are built for American soldiers and their families to live all around the world. It is an interesting example of a type of modern auto-segregation for a Nation symbolic of universal freedom…

Photography that is drawing with light. At night, especially in those with no moon, the blackboard is black. Crayons and chalks are replaced with the color of artificial lights. Sulphorous green lamps, neon lamps, almost white light halogen lamps. The combination of lights generates flashes of the absolute, in contrast to the deafening silence of resting humans, animals and things. The sensations when reviewing the resulting photographs supercede observation. The reassuring presence of the car nearby. A dog in the distance, a truck that decelerates and then with its headlights illuminates the scene. A scene. A dazzling match between one’s own interior idea, the sense of the ongoing story and its location; in a sequence of mental images that tell so little explicitly but rather suggest a clue. A key that infuses mystery and ambiguity, that speaks to the borders of the visible – with the intelligibility of the subject – and inspires the viewer to find his own reading, to be carried by the image into a parallel and immersive world, with eyes like those of mine. The story of soldiers and their sleeping families interwines with the barbed wire and with the struggle between dark and light. An evergreen metaphor of the dualism that has so thoroughly permeated our culture. Positive and negative, good and bad, zero and one. And the flare becomes a distant UFO, just landed or about to leave. A lit neon, a bar of kryptonite. In the countryside that surrounds it, the boundary between earth and the sky, while everyone is asleep, I obstinately keep watching.

To write about Massimo Cristaldi’s eerie images from the series Insulae is like peering into a rather ominous nightmare. The reasons are various, not the least being the role photography plays in our contemporary visual world. Certainly, in a very obvious way, the images inform. But like all images that go beyond simple information, they create an atmosphere and a mystery which lie within the photographic image itself and which provoke a more emotional and ambiguous reaction on the viewer’s part.
Semiotically, Insulae, among other things, speaks of darkness, solitude, rigidity and fortified codification: all aspects relating to fear deeply rooted in the human experience. Our rational self can make a series of comments on the role of U.S. military force in foreign countries, we can look onto the isolation our armed forces submit to from friends and foe alike, we can speculate on who is isolating whom, on which side of the fence lies the aggressive force, etc. etc. But the images, I feel, ring a deeper tone which lies far below our logic.
There, below rationality, lies the force of these images, the poetry of darkness, the ironic stare from afar, islands of light, as Cristaldi himself says.
Strange strength declares itself in the middle of nowhere. Sometimes I’m thankful, sometimes I worry. The images are fragments of a visual fiction. The stories they narrate come from uncomfortable corners of the mind.